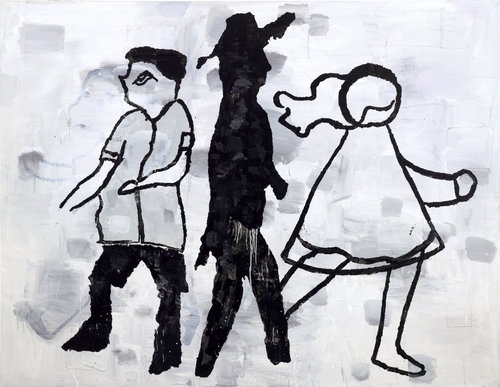 I spoke with the great Donald Baechler on the eve of his new solo show opening Thursday November 2 from 6–8 pm in New York City at Cheim and Read.

Becker: You have a show opening at Cheim and Read. How many pieces will be in the show?

Baechler: Cheim and Read picked up a lot of work from my studio over the past few weeks but I leave the choices up to John Cheim.

Baechler: Yes, he has a great sense of hanging shows and what belongs where - but I don't know exactly what it's going to look like yet, it might be sparse, it might be jammed full.

Becker: Was it work produced new specifically for this show?

Baechler: It's mostly works from this year but there's one older painting I began to paint in 1998. Then I rolled the painting up, put it away and moved studios a couple times.

Becker: It was unfinished?

Baechler: I thought it was a wildly unfinished piece but I realized it was much more resolved than I thought. But then I saw it, unrolled it the summer before last and did what had to be done to it. So that piece is included in this show.

Becker: That's interesting when that happens. I also want to ask you about a few specific things relating to your work, I've followed it since the 90s. I think I saw your work for the first time in Soho in the 90s?

Baechler: I was represented by Tony Shafrazi back in those days and I also worked with Paul Kasmin.

Becker: I see. And can you remind me a about your personal history a bit?

Baechler: I was born in Connecticut but my dad was a New Yorker, he was born here.

Baechler: And moved up to Hartford to start a family.

Becker: Have you always worked in the style you are known for?

Baechler: You mean how some artists have massive sea changes in what they're doing?

Baechler: And then destroy all their work from before?

Becker: I mean did you start painting in a certain way and then arrive at your current style?

Baechler: It's a good question. I mean I think there's an evolution that goes on. But that tends to slow down as one ages I've discovered - but most artists say the same thing.

Becker: So it was a big change?

Baechler: Yes but also things that seem like big changes to an artist are not big changes to other people. But when I do lectures I frequently start with slides of works that I did as an undergrad to show a kind of continuity.

Becker: So its ongoing?

Baechler: A lot of the interests that I continue to have I had back when I was 19 or 20.

Becker: Like the elements in your work that can go from simply painted things to more sophisticated things?

Baechler: What do you mean more sophisticated?

Baechler: My work is quite often being compared to children's art. It's a reading of my work that I've never encouraged. I'm really not that interested in children's art.

Becker: I don't think of children's art at all when I see your work.

Baechler: Artists at least since the 19th century have been interested in bringing their work back to a kind of primitive child-like way - Picasso talked about it a lot.

Baechler: Obviously that's there but it's not something I dwell on.

Becker: I'm very fond of the collage aspect of your work. Tell me about the materials you work with?

Baechler: The paintings on canvas are all fabric collages. The paper works are usually paper - they both have the same sort of look. They also both have similar iconography ect. but one is paper and one is canvas.

Becker: In the past, I've seen the Polaroids and the paintings that Andy Warhol made of you. Andy painted your portrait. You experienced a legendary era in New York that doesn't really exist now. How do you feel about New York as an art scene these days?

Baechler: It's grown so many folds over the years. When I got here in 1977 to go to Cooper Union even as a student the art world seemed like a pretty small place. You could relatively quickly navigate your way around people and it seemed like it was possible to sort of know everyone who was worth knowing?

Baechler: Now it seems like an ocean. I don't know how you find the center of the art world any longer?

Baechler: I think partly it's generational. Younger artists don't have any trouble finding what center they belong in. But there seems to be quite a few art centers these days. I wouldn't know where to start now, if I was just starting.

Becker: So what is the process you go through to make paintings? Do you kind of think about it or plan it?

Baechler: I wouldn't use the word appropriation there's a lot of reference to pre-existing imagery. Many drawings are drawings of other drawings, if that makes sense?

Baechler: So everything starts with a drawing or a conglomeration of drawings.

Becker: So that's where they start.

Baechler: The paintings really start with this pile of collage stuff that I've been working my way through - but the backgrounds are usually loaded with imagery. But now they're emptied out, there's no longer an iconographic program in the background like there used to be. I mean I think you know those paintings?

Baechler: I've emptied them out and it's more about abstract marks, mark making and color deployment and things like that.

Becker: I also saw the sculpture you made, the large sculpture. It's of a walking woman?

Baechler: Where did you see it?

Becker: I saw a photograph of you, I think it was out in a field?

Baechler: There are a few versions of it. There's three 10 ft tall versions that are in public collections, one is in St. Louis walking down the sidewalk in the business district. One is in Miami in a mall that has a lot of real art in it. And then we made a 30 ft. tall version that's installed in Gabreski airport in Long Island. It's right at the entrance to the airport.

Becker: I was so happy to see the sculpture because I'm so familiar with your paintings. It's of a woman walking right?

Baechler: I call it a walking figure, it's a woman but I also think its gender is ambiguous.

Becker: What's it based on?

Baechler: It's based on a drawing I made in 1987. I was always making sculptures sporadically in the 80s but I hadn't found a way to do what was happening in the paintings in the sculptures. They seemed kind of divorced from each other until I found an insight into the flatness of my drawings and how they could work as a three-dimensional object.

Baechler: The walking figure we are talking about has a weird compression to it that only makes sense when looked at from the side. If you look at it from the front or the back it kind of disappears.

Becker: So the show opening at Cheim and Read will be mostly drawings and paintings?

Baechler: There are 4 new bronzes. There are large but not more than 3 1/2 ft. high. I'm not sure if they will be in the show or if we'll get them from the foundry in time? But the show will be primarily recent paintings and I don't think any works on paper actually.