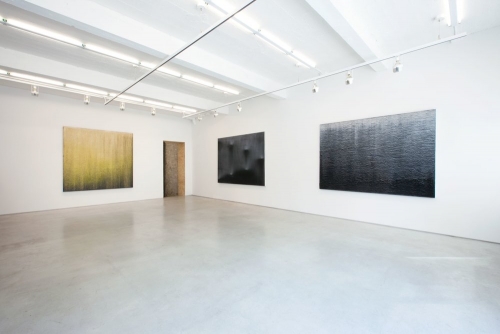 Eric Freeman is known for painting illusory tricks of color and light. A textured grayscale surface may appear to be bumpy concrete up-close or a rippling nighttime ocean from a distance. Another work might be mistaken for a crumpled bed sheet or a shimmering piece of metal. All of these effects are achieved with the application of oil and pigment on canvas—which sounds minimal, but behind Freeman’s absorbing paintings is a deliberative process.

Freeman’s new works on view at Launch F18 continue the artist’s approach to abstract illusion, where a play of light within the painting’s surface seems to create movement within the stillness of pure color. A new depth is created by his method of applying paint, which involves building layers through mixing oil and “high tech pigments”—whose particles absorb and reflect light. The appearance of the work of art is relative to the viewer’s position in space and the conditions of its surroundings.

These reverberatory effects are familiar from the work of Light and Space pioneers such as Robert Irwin and James Turrell, while Freeman’s use of color holds all the intensity of 20th-century Color Field painting. But a concentration on surface is something that speaks also to the contemporary era, where viewers are used to the prevalence of flickering screens, whose flatness contains many dimensions. Here the painted canvas exceeds the digital screen by offering tangible textures and generating unexpected shifts.

Aside from the history of American abstraction and the screens of contemporary life, where does Freeman’s pursuit of the effects of light come from? He has lived and worked amid the particular qualities of Long Island dusks for 15 years—and these conditions, he has suggested, have inspired his painterly process. In a 2009 interview with BOMB magazine, he revealed perhaps the natural source of his tricks: “The flatness and proximity to water of the Hamptons provides light that permeates your head. It’s a kind of light that is electric even when it’s not bright, a kind of light that occurs and is a result of open space.”