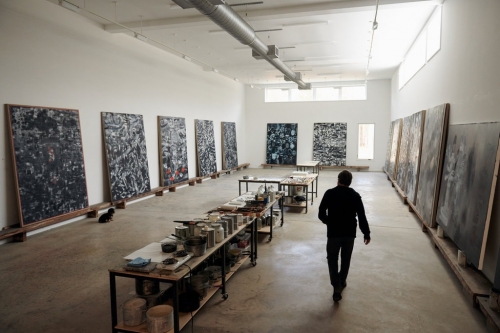 Ross Bleckner on His Comeback and Mary Boone

Putting personal dramas behind him, the artist opens his first New York show in five years (at a new gallery).

The veteran painter Ross Bleckner is a wised-up sort when it comes to matters of perception and reputation.

“So this is a comeback story?” he asked, perhaps hopefully, during an interview in his Chelsea studio last month.

Mr. Bleckner, 69, made his name in the 80s and 90s by channeling the anger and sorrow of the AIDS crisis into somber, abstract paintings. Since then, he has been painting steadily, lately from his base in the Hamptons.

He hasn’t had a show in New York in five years, but on April 24 he debuts a suite of more than a dozen canvases at Petzel Gallery in the show “Pharmaceutria” (“sorceress” in Latin). It furthers Mr. Bleckner’s exploration of modes of perception.

The large-scale compositions are mostly black-and-white, with flowers, faces and hands emerging out of the abstract swirls in some places. The burned areas turn white, creating a hazy, ghostly effect.

“My work is really about consciousness more than anything,” said Mr. Bleckner. These days, he meditates and takes, as he says, “consciousness drugs.”

Not that he’s too touchy-feely when it comes to making the new paintings: He burns them with a blowtorch as part of their creation, so that in one sense, they’re “destroyed,” he said.

“I think about it as a resurrection,” he added.

For some, the show may be haunted by Mr. Bleckner’s longtime dealer, Mary Boone. He showed with her for 40 years, and she helped make him a star.

Ms. Boone was recently sentenced to 30 months in prison for filing false tax returns, and her gallery is closing in May. Even closer to home for Mr. Bleckner, they were both ensnared in a drawn-out scandal involving the actor Alec Baldwin.

Mr. Baldwin claimed that Ms. Boone sold him a copy of a work by Mr. Bleckner, “Sea and Mirror,” while falsely claiming it was the original he sought, from 1996, when Mr. Bleckner was at the height of his popularity. Mr. Baldwin sued, and the matter was settled with a payment of at least $1 million, and by Mr. Bleckner providing two works to Mr. Baldwin.

“Lot of people evade taxes,” Mr. Bleckner said about Ms. Boone. “A lot of people don’t get caught. I was surprised. Mary’s a very smart woman.”

But he added, “She shouldn’t have done it. And she’s paying the price.”

As for “Sea and Mirror,” was Mr. Bleckner aware that Mr. Baldwin thought he had bought the original?

“I did not know that,” he said. “And I thought she would say that it had been painted as close to the original as possible.” Mr. Bleckner added that he thought the actor was seeking a new commissionthat would match the older work.

In a phone conversation, Ms. Boone addressed the matter but said only, “I can’t tell you what Ross was aware of. It’s hard to speculate on what people remember.”

Rarely have two art world careers been so intertwined. But Mr. Bleckner said that last year he began the process of setting up the Petzel show — with Ms. Boone’s help.

As for his decision to move officially to another gallery, Ms. Boone said, “Change is good, even when it’s uncomfortable.”

Mr. Bleckner has a way of not seeming too bothered by awkwardness — or rather, he’s bothered by enough things that a single one doesn’t really stand out. Eric Fischl, a fellow painter, close friend and another former artist of Ms. Boone’s who decamped from her gallery in 2015, said that Mr. Bleckner was famous for his “humorous neuroses.”

Less amusing are the lawsuits Mr. Bleckner is trading with a former associate, Cody Gilman. In his suit last year, Mr. Gilman said he was sexually harassed and assaulted by Mr. Bleckner while in his employment as a studio aide. Mr. Bleckner called that “absurd” and is suing Mr. Gilman, accusing him of attempting to extort $2 million by threatening to portray their consensual relationship as a case of sexual harassment.

Though roiled by his share of personal drama, Mr. Bleckner said that it was the political theater of 2016 and the election of President Donald Trump that fueled the rough surfaces of the paintings in “Pharmaceutria.” One of the works has a tiny bit of text, rare in his art, that says, “HOW DID THIS HAPPEN.”

“I start them by bringing out my anxiety and my fear and my anger at our world,” Mr. Bleckner said. “My question is, why can’t everything just be beautiful?”

At a time when politically and socially engaged art is omnipresent, Mr. Bleckner can be seen as an early adopter.

Of his works from 1980s and 1990s, Jane Panetta, a curator at the Whitney Museum of American Art, said, “His paintings grappling with the AIDS crisis are some of the strongest we have from that moment.”

She added, “Formally, he’s impressive. You can stand there and just appreciate how he applies paint to the canvas.”

Mr. Bleckner turns 70 in May. Mr. Fischl, a member of the same generation, said that he thought that the passage of time was central to the new work. “He’s thinking about himself as a person aging, and in relation to mortality and nature,” Mr. Fischl said.

Mr. Bleckner is not slowing down. He paints most every day.

“I want to be as good as I can, for as long as I can,” he said. “And hopefully break through that darkness with a little bit of light once in a while. If people like it, great. If they don’t, well, that’s life.”