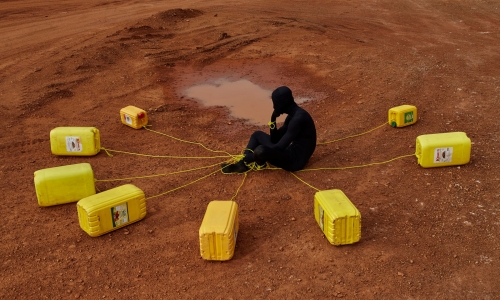 'Water is sacred': 10 visual artists reflect on the human right to water

The UN declared access to water and sanitation a human right a decade ago, but 785 million people worldwide still have no water close to home

Ten photographs marking the 10th anniversary of access to water and sanitation being declared a human right by the UN have been commissioned from 10 visual artists by the charity WaterAid to show the impact of clean water on people’s lives.

For many communities, water sources are usually far from their homes, and it falls to women and girls to spend much of their time and energy fetching water, a task that can expose them to attack from men or wild animals.

Without sanitation people have no choice but to use communal latrines or find a place to go to the toilet outside, often having to wait until the cover of darkness. This leaves food and water resources open to infections and helps spread disease.

This work references Nigerian-Yoruba sculptures and the healing qualities of water as a basic element of life. Yoruba believe water to be a symbol of force and strength.

“I live in a small town in the state of Bahía [Brazil] and we are in the middle of the rainy season. There is water everywhere but it rains with such intensity that the water system collapses very often and there is no water at home. Here water is a utility but also an important part of the landscape and the culture.”

All On Her by Collin Sekajugo (Uganda)

“This piece centres around the role of women and girls in society. Despite the significance of their contribution, women and girls have for generations been held captive by patriarchy.

“I adopted a picture of a young woman carrying a load of empty jerrycans in search for clean water to cater for her family.

“Water allows us to celebrate, to relax, to socialise, to be joyful. This is a quality that we in the western world easily take for granted. My work very much talks about quality of life related to water and how access to clean water is essential for our soul as well as for our body.

“I immediately thought of rain and how water falls from the sky that we all share. I then remembered taking photographs of people playing under the rain in Mexico … The water looked like stars.”

“I wanted to create art that would represent the anguish and violence that go along with our planet’s problems. People do not realise how their own suffering is tied to the environment: to their long trip to fetch water, or their discomfort under the heat when the streets have no trees. Ghana is facing some of the most detrimental consequences from climate change and water shortages. Yet the government does nothing, so I have taken it upon myself to educate through art.”

“My response is a reflection on how many of us, particularly when living in the west, we take the bathroom and easy access to water for granted.

“Even those we consider despotic have easy access to such sanitation, while this is a right denied for many women and girls around the world, particularly those in the global south.”

“The initial idea came from the constant reminders to wash hands and the NHS step-by-step guide during the time of coronavirus. I noticed that the steps to prevent the spread of the virus were dependent on three key things, clean running water from a tap (ideally with a modern faucet that could be turned off by using your elbow and not your hands), a soap dispenser with liquid soap and disposable paper towels. All of these are not universally accessible, even within the UK.

“The sea reminds us that everyone is connected and that water is sacred.”

“In the past, Bonthe was a thriving trade hub and economic centre. In the 80s, palm products and seafood became major industries. But like a sun-bleached photo taken of an exotic island town, where you can see things once were bright and new, now all that’s left is a vague image of what used to be. During the world wars the French and English navy used the town as a naval base. This Victorian water pump is a reminder that the right to clean water and decent toilets is a luxury afforded only to those who are fortunate.

“The time to change this is now. Taking a moment to show gratitude for this seemingly basic right every time you wash your hands or take a shower adds another drop of water to the sea of change.”