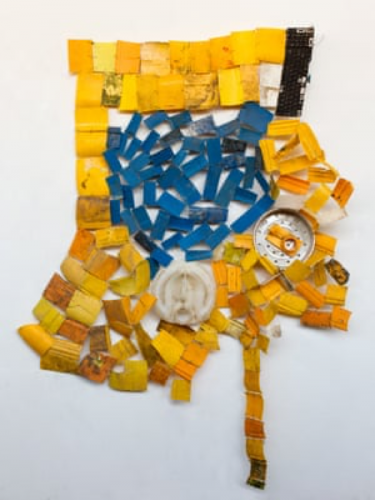 A selection of Clottey’s art works are now being shown in San Francisco. Photograph: Nii Odzenma

The Ghanaian turning thousands of discarded plastic bottles into art

The brightly coloured plastic jugs once played a vital role transporting water during Ghana’s droughts. Now, they’re creating a new environmental catastrophe of their own.

Seas of discarded yellow, blue and white containers – referred to locally as “Kufuor gallons” after the water crises endured under president John Kufuor in the early 2000s – have become a troubling part of Ghana’s landscape.

No longer used by local communities, vast quantities of jerry cans have built up on city streets, dumps and beaches, contributing to worsening pollution levels. In response to the growing crisis and government inaction, local artist Serge Attukwei Clottey has started using large-scale plastic art installations as a way to draw attention to the issue.

The artist says his aim is to galvanise the local community to combat the large quantities of plastic waste now blocking sewers in cities and endangering wildlife habitats along the coastline.

Clottey, who has been gathering the containers for more than 15 years, cuts them into small tiles and shapes them over an open flame, later moulding sections together and binding them with copper.

The process results in what he refers to as “paint-less paintings” – large plastic tapestries that also incorporate other salvaged waste items, such as discarded electrical goods or wood, bones and shells gathered from the coastal neighbourhood where he lives and works in the capital, Accra.

Influenced by local folk art, Clottey says his work is not just a commentary on the human consumption and waste but a much-needed practical response to the endless cycle of water shortages and pollution experienced in Ghana.

“Every second across the world, someone leaves a faucet running, takes a long shower, or pours out some unwanted water. Every day in Ghana – where not everyone has access to running water – the streets are filled with children carrying yellow buckets on their heads, on their way to a fountain,” he says.

In recent years environmental groups have focused efforts on educating locals about littering and waste management, however the recurring water shortages complicate the issue as the need for the cans keeps returning.

“Ghana is one of the driest countries and faces some of the most detrimental consequences from climate change and water shortages. Yet the government does nothing, so I have taken it upon myself to educate through art,” Clottey says.

In the wake of El Niño, Ghana is once again one of several countries on the continent facing further water crises. In Ethiopia, the population is now heading towards its worst drought in 50 years while in Zimbabwe’s president Robert Mugabe has declared a state of disaster.

“People do not care to listen about how they should use less water or waste less. Children are not educated about global warming in school, and they are not inclined to take action about the issue,” Clottey says, but he hopes the vast plastic installations will help change attitudes both at home and abroad.