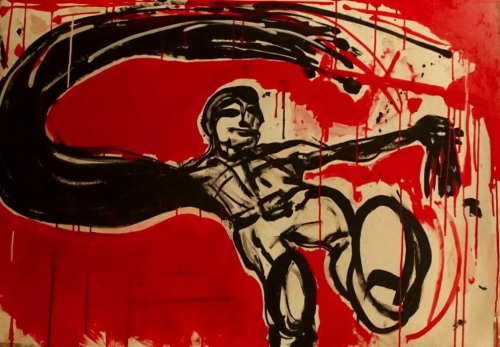 The actor's work is included alongside examples by Dash Snow, Ouattara Watts, and others.

The late Hamburg-based painter Norbert Fleischer’s Think in Pictures—a moody image of a man’s face overlaid with swirling text—is the curatorial inspiration behind a new exhibition in New York’s Lower East Side of the same name organized by dealer Tara Amelchenko, painter John Newsom, artist André Butzer, and Matt Dillon, best-known as as actor, but who is also a practicing artist. “John Newsom,  André Butzer, and Matt Dillon originally conceived of bringing together a group of artists whose works somehow either directly or indirectly related to methodologies found in Norbert Fleischer’s inventive mental collages,” said Amelchenko.

Largely overlooked in his lifetime, Fleischer spent his career experimenting with pictorial fragmentation and this exhibition of works by 36 international artists showcases the myriad ways that abstraction and representation can interact. Having struggled with depression, Fleischer died by suicide in 2016. The exhibition is a testament to his legacy and his artistic innovations.

“Fleischer’s own work sets the tone as an echoey catalyst.” said Amelchenko. “It’s somewhat of a rebirth and public discovery for Fleischer and we are enjoying being a part of his growing exposure.”

Pastiche and collage form the foundation of the 65-work show, which showcases a mix of established and emerging artists. Among these is Ouattara Watts, whose work Jean-Michel Basquiat famously adored and who melds the mythological imagery of his native Côte d’Ivoire with jazz influences and Neo-Expressionist techniques.

“It’s definitely a visual feast and plays off the idea of using collage and pastiche as pictorial strategies in the practices of these artists’ works in concept or assemblage,” said Amelchenko. “It becomes really interesting because the group show itself can be looked at as a type of collage.”

But for those mainly curious about what Dillon’s own artwork looks like, you won’t be disappointed, either—several works by the actor are included in the show. “Dillon is not only an actor, director, writer, and musician, but has also been a visual artist for many years,” Amelchenko said. “This is somewhat of a debut for his work and has been a wonderful success.”