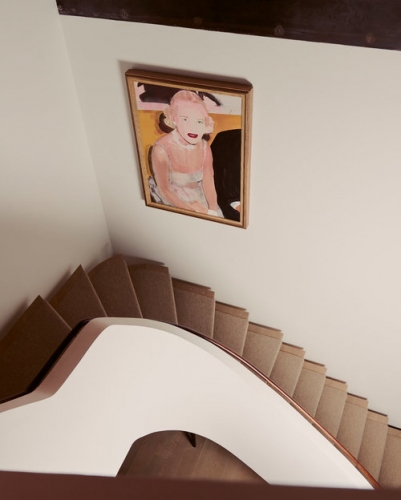 Naomi Watts — whose work includes such varied films as “King Kong,” “The Ring” and “Diana” — will be the first to tell you she is no big-league collector. She also does not buy in bulk, having purchased just 20 pieces since 2011. And while she once spent nearly $100,000 on a painting, even that is inexpensive compared with the multimillions circulating at the highest levels of the collecting world.

Ms. Watts, who is from England, grew up around art — her mother was a painter and her brother, Ben Watts, is a photographer — and she loves to live around it, she said. So this versatile actress has covered the wall space of the TriBeCa home she shares with her two young sons — much of it with work from fund-raising auctions for the New York Academy of Art, where she is a board member. Ms. Watts said she looks forward to those galas (the next, “Take Home a Nude,” is scheduled for Tuesday) as opportunities to discover new artists and raise money for scholarships.

At those auctions — where she has been known to get into bidding wars — Ms. Watts has acquired work by Will Cotton, Donald Sultan, Hugo Guinness and Liz Markus, among others.

Though her homes in New York and Los Angeles don’t have much wall space left, Ms. Watts said it will be hard not to keep acquiring pieces. “I won’t buy big paintings right now,” she said, “but stranger things have happened. If I fall in love with something, I don’t want to say never.”

These are edited excerpts from the conversation.

I love art. I’ve always loved it. I was raised by an artist. The first art I started investing in was photography — a Bill Henson photograph I bought for $14,000. I knew it would go up in value.

When did you feel ready to start buying?

I think it was “King Kong” money or “The Ring.” I just wanted a home, I wanted to lay some roots and I wanted it to look good. I said, “I’m going to spend $1,000 on a great photograph rather than a dress.” I love to find works by emerging artists because I can’t afford to buy huge pieces. I know it sounds funny, but I grew up poor, so I still think I’m poor.

What is your biggest purchase to date?

In some of them, there is humor, like that little boy in the middle of a handstand [Scott Avett’s “Tumbling Boy,” 2017 ]. Mostly, there is mystery.

What is it you like about living around art?

I love that I can find a painting that tells a whole story. And you don’t lose it, like a piece of jewelry, and it doesn’t fray like a dress — it doesn’t go out of fashion. It’s like a tattoo. It always has meaning at that time in your life and it’s a reminder of that. It tells the story of that experience.

So you don’t view art as an investment?

I’m not planning on selling anything.

Do you consider yourself part of the art world?

I’m not a highly sophisticated curator or knowledgeable art historian. I’m totally drawn to it and interested and open to learning.

Why did you get involved with the Academy?

It’s not outside my wheelhouse because art is something I’m passionate about. And I love the school. Every time I’m there, I feel the energy.

I was attracted to the expression — that’s a face that’s really strong. It really calms me.

And the Alison Simmons “Swing?”

It speaks to me of freedom. The image of a woman falling or flying — she looks to be enjoying herself.

Do you see yourself someday raising your paddle among major collectors at Sotheby’s or Christie’s?

Probably not. I might go just out of interest, but I wouldn’t be putting my hand up. I’m not necessarily the real thing, but I love art and so, it’s real to me.

By Robin Pogrebin for The New York Times