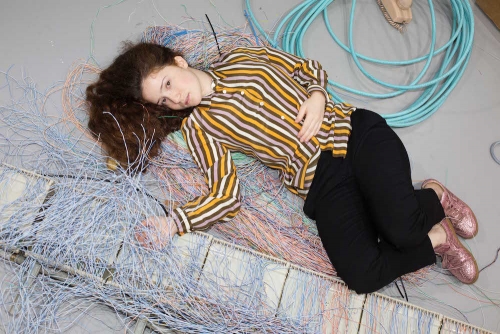 It began with 16 men, 16 workstations, and 10,000 roses in Holmdel, New Jersey. For four days, the workers plucked apart each rose, petal by petal, photographing and pressing the ones they deemed most beautiful. Directing this assembly line was artist Sarah Meyohas, best known for Stock Performance(2015), a performance piece where Meyohas painted the trajectories of shares that she traded, in real time, on the New York Stock Exchange.

Cloud of Petals, the 26-year-old artist’s latest project, is as ethereal and delightfully obscure as it sounds. Meyohas marries nature and technology to discover the meaning in collecting (and collected) data; it’s fitting that the undertaking was conducted at Bell Labs, a now-abandoned research complex that birthed the information theory, which used math to define and represent information, allowing for its transmission, storage—and resulting, eventually, in the creation of the Internet. Opening at Red Bull Arts New York on October 12, Meyohas’s show is fourfold: it features a film, vitrines made by wall panels from Bell Labs fitted with two-way mirrors, six virtual reality simulations depicting digitized and pixelated rose petals, and two wall displays of 3,200 individually pressed and preserved petals.

Each component of the show is a meticulous archive, striving to be a wholesome form of documentation. But what of? And, more importantly, what for? These are some questions that Meyohas poses—and ones to which the show doesn’t necessarily provide answers. Instead, it encourages the questioning of value and representation; of perception and digital images; of data and documentation; of information theory and archive theory; of beauty and nature; of computation and consciousness. These components constitute Meyohas’s clouds—clouds of literal and virtual petals, clouds of images, and clouds of data.

PIMPLOY PHONGSIRIVECH: Where were all the women workers at Bell Labs?

SARAH MEYOHAS: First of all, visually there’s so much more tension with men pulling apart these roses—these masculine hands, there’s a sexuality latent within that. A lot of these types of work are also done by women, for example Amazon Mechanical Turk or the Google Scanning Project. I was interested in flipping systems already in place.

PHONGSIRIVECH: How did this all begin?

MEYOHAS: I realized there’s always an underlying desire to create, understand and investigate value in all my works. The last show I did in New York was this Stock Performance show and that was pretty direct [laughs]. Like, literally, with the stock market.

So in the back of my head I’d had dreams of tons and tons of rose petals. Roses were interesting to me because they’re hyper symbolic to the point of kitsch—you know, love, beauty. It’s also because they’re a super commercial flower. Roses can be grown everywhere and our desire is almost embedded into the genetic code of a rose. We’ve made roses to be in all sorts—garden roses, normal roses, red roses, white roses, pink roses, green roses—and that’s human desire.

A rose petal itself is just a circle, really. And to me there was a kind of pixel, petal [similarity]—you know, petals as part of this unit, pixels as part of an image. Anyway, so the dream became the six different virtual realities that you can experience.

The point of tension that I found interesting was the creation of [the realities]: turning it into a factory, the picking apart [of roses], and this kind of compulsive act. I was there with the 16 men, the 10,000 roses, the 16 laptops and cameras and hard drives and desks and shot it all on 16mm [film], which itself was another decision. I’m doing a project about big data—digital data—and documenting it on film. That was important in the sense that it puts into contrast and highlights the nature of a digital image.

Even how we see color is super subjective. I learned about this because I was trying to make sure the colors were right, and I was on a Josef Albers floor pattern [in Bell Labs] and I was thinking a lot about color. Apparently, by the way, women in their early thirties are the best at seeing color.

PHONGSIRIVECH: So there are a lot of layers here—men picking out the petals, conversion into digital images, data in the clouds, literal petals, digital petals…

MEYOHAS: It’s super layered and it’s hard for me to describe. I feel like I’m doing a decent job right now…?

MEYOHAS: Thanks! It’s funny compared to the stock project I did. I could summarize it in two sentences. I manipulated stocks on the New York Stock Exchange; I drew the lines on canvases. Then, you can read into it as much as you want. Is it a critique? Is it celebratory? Is it illegal? Whereas this one I’m like uhhhhhhhhh … genetic code, computer code? Men? Beauty! Subjectivity … the world… [laughs]

MEYOHAS: Archive! Data! He loves me, he loves me not…

PHONGSIRIVECH: That’s right! I never even thought of that. So, Sarah, when you were growing up, were you always into art? I know you studied finance?

MEYOHAS: Right. I did finance at Wharton [School of the University of Pennsylvania] and also International Relations. I grew up in New York City with my mother and grandmother. My mother was a great educator and she wanted to make me as well-rounded as possible … and part of that well-roundedness was also going to art museums.

I went to tours at the Met in Spanish. We’d go every weekend, have lunch, and then in the afternoon go to the tour at the Whitney for kids. Religiously, every weekend. But my favorite subject at school was actually math.

So I went the more traditional finance track [at U Penn], which appealed to me. Then I took a photography class in sophomore year and instantly there was a maturity to the work and it just snowballed. Eventually it just came to this crisis moment where it became a necessity to become an artist.

PHONGSIRIVECH: And then you went to Yale for an MFA.

MEYOHAS: Yale was very much about learning how to work rather than making amazing work. Also I realized don’t have a studio practice. That’s not what I’m about but I can create situations and interventions and somehow the artwork emerges from that, which is a very different way also of understanding and conceiving. Usually the artist puts in work and there’s a final product, but this is like tentacles.

MEYOHAS: Yes, and it reveals itself over time in different ways. It lives in different places. I mean, even the stock performance thing lives in financial records as much as it does in the paintings. Which one will last longer? In 20 years could I find those trades somewhere in some record?

PHONGSIRIVECH: Anything else we should know about you?

MEYOHAS: I like to play piano and I like to play backgammon. I have a cat named Zazoo. [pauses] Oh! This show is dedicated to my grandmother. She passed away in August. Her name was Fleurine. And, of course, in French, “fleur” means “flower.”