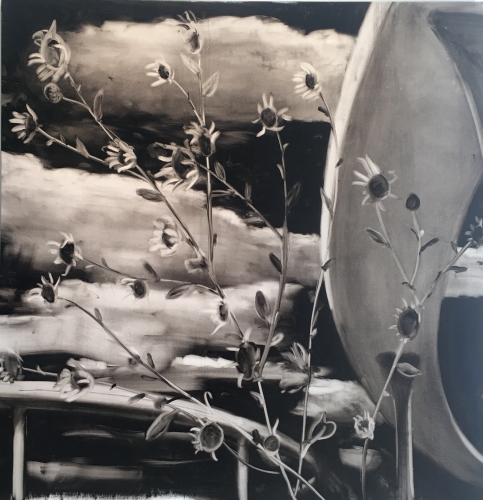 Homogeneous youth culture seems ubiquitous, yet American teens are in certain ways a breed apart. Unlike in most developed countries, in the USA adolescence is prolonged and blinkered and revolves largely around cars; high-school driving classes put 16-year-olds behind the wheel, and growing up is all about getting out on the road. The world, or rather what teenagers think is the world, becomes accessible. The lingering summer holidays are, of course, the high season of teendom. No surprise, then, that Joe Andoe, who was born in 1955, sets his paintings of rural youth in a perpetual, if not always sunny, summer.

An Oklahoman now based in New York, Andoe works with pared-down, deceptively biddable images: boxy 1960s automobiles, beer cans, two-lane blacktops and lickerish young women. His technique of applying paint and then wiping it away blurs the contours of his figures. Glimpsed quickly, the soft monochrome lines of his canvases suggest cosy snapshots from the late 1960s or early 1970s. The result of the baby boomer generation’s expectation of boundless freedom and endless youth is a hermeticism peculiar to America, an assumption that the American sky is all sky, American land all land. But Andoe sidesteps reassuring nostalgia by using these symbols to show an underlying provinciality.

Skies hang low in Andoe’s work, particularly in the car paintings; clouds and air seem capable of swallowing these heavy vehicles whole. In Untitled (Car on Road) (2003) three shadowy figures travel along a lonely stretch, the dingy black sedan oddly insubstantial against a gaping aluminum sky. Untitled (Road with Dark Sky) (2004) combines swampy green and copper to detail a highway less wide open than ominous. The mood of Untitled (Lake and Flowers) (2003) verges on the apocalyptic, nature shimmering and glowing in ways that suggest human rather than purely natural forces at work. In these and other paintings Andoe underscores the American-ness of his images by restricting his palette to the silver, copper, black and green of American currency. Untitled (Girl with Jean Shorts) (2003) is one of the best examples of this: an impish girl looks over her shoulder as she wades out into a lake, her ass voluptuous beneath her tiny, cartoon-narrow waist, the scene rendered in the vernal aquatic green of a newly minted dollar bill.

Most of Andoe’s women look sly, their smirks more controlling than controlled. Untitled (Couple Lying Down) (2003) shows a conked-out dude whose honey gazes straight out at the viewer: provocative, inviting, perhaps willing to ditch her current boyfriend for someone new. Sexuality in Andoe’s juvenile universe is both obvious and subversive. In one painting the tresses of a topless girl’s hair barely conceal her nipples, while her hands lightly grasp a beer can whose sharp V-shaped opening echoes her bikinied crotch.

In another, a girl in cut-off jeans leans back on her elbows on the edge of a bed, not vulnerable and perhaps a touch annoyed, relishing the happenstance of biology and chronology that have conspired to give her momentary power.
Untitled (Blue Portrait) (2003) is a softer, cameo-style portrait but slips in the detail of a roll-your-own cigarette to introduce a similar hardness that the baby-blue background of the painting does nothing to dispel. In each of his portraits Andoe’s brushwork shows clear Expressionist influence, but unlike their Viennese, Berliner and Scandinavian predecessors, his subjects are not cosmopolitan vixens, merely feral kittens from the heartland. Of all the paintings in this show, Untitled (Reclining Figure) (2002) is the only one that hints at more complexity than the usual ups and downs of adolescence. The woman seems to be in her twenties, her head as large as it might appear to a teenage boy lying next to her. She wears an enigmatic near-smile, confident but not defiant.

In her collection of essays Dark Age Ahead (2004) Jane Jacobs notes that ‘one of the most besetting sins of Americans is that they don’t seem to think that any place outside the United States is totally real’. Joe Andoe’s paintings describe the residents of this self-referential world, desperately unaware of what lies beyond their own admittedly expansive horizons. These are vignettes of lives circumscribed by vastness, seduced by America’s self-congratulatory mythologies. What gives them their presence is Andoe’s willingness to implicate himself in the scenes, to reveal himself as part of the group. Not merely a voyeur, his scrutiny is leavened with identification. Each of his subjects may contain a part of him.