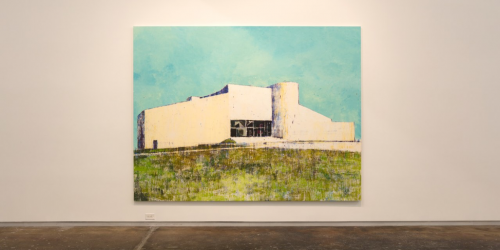 Philip Johnson's Art Museum of South Texas as painted by Enoc Perez, part of a new show focusing on the architect's buildings in Texas.Kevin Todora,Kevin Todora

A new exhibition in Dallas spotlights the architect's Texas work

In vivid washes of color; in overlaid stencil-like images; and in bronze sculptures of massed, crumpled-up forms, artist Enoc Perez uses a multimedia approach reminiscent of Warhol and Rauschenberg to both celebrate and satirize some of the 20th century’s best-known buildings. In Dallas this month, he’s turned his sights on controversial modern designer Philip Johnson: In a show sponsored by local art museum Dallas Contemporary, Perez has created works featuring Johnson’s buildings, and then installed some of them inside the buildings themselves (of which Dallas has no fewer than six). The artist took a break from the museum opening to talk about the intrigues and the afterlife of America’s most infamous architectural gadfly.

AD: How did you first become interested in Philip Johnson, and how did that lead you to Dallas?

Enoc Perez: I had been invited three years ago to do a print for the Glass House [Johnson’s private estate and foundation in Connecticut]. When I saw the place, I fell in love with it. There’s no hierarchy to the buildings there: The painting gallery, the sculpture gallery, everything is considered of equal importance. After that I started to get commissions in lobbies of Johnson buildings—I guess people thought I was a Johnson expert, even though I’m no architecture scholar, more of a fan. The curator of Dallas Contemporary said we should do something here, since there are so many Johnson buildings in the city. I did my homework and realized it’s a gold mine, so I said, "Let’s do it."

AD: What kind of approach did you take in adapting Johnson’s buildings into artistic artifacts?

EP: We started making paintings of them, thinking, for example, Why don’t we make Franz Klines using the Comerica Building in Dallas? Then we moved onto some the buildings I like better, like his museums in Texas, making more paintings but also sculptures—like, doing architectural models but then turning them around, treating them as artisanal objects, like an African mask or Puerto Rican arts and crafts. Once I figured that out, the rest of the show came out pretty easily; I also did the more abstract paintings which in a way are kind of brutal, layer upon layer. Very much like our culture, in a way, brutal and un-delicate.

AD: Is there some link, in your mind, between Johnson’s work and our contemporary moment? Why tackle this subject now?

EP: Johnson was promiscuous in terms of his aesthetic. Some of it is good, and some of it is bad. And that lack of aesthetic judgment seems somehow connected to this Trump era. It determined my approach to the abstractions, for instance, like the way I treated the Crescent project Johnson did in Dallas—it’s this slightly gaudy pseudo-French chateau, and looking at it becomes a meditation on the question “Oh my God, how did we get into this mess as a culture?” It’s painfully apparent also in the lower level of Johnson’s Thanks-Giving Square Chapel here: There all these placards on the wall saying “We’re Grateful for Native Americans," "We’re Grateful to the People of Dallas,” and then one that says “We’re Grateful for Exxon.” This fruit punch of ideology, that’s kind of what America is. There’s a beauty to it, but it’s also really crazy. So the sculpture we made, right there in the chapel, we made it to look like a piece of pagan worship. I don’t know if I’ve discovered America in working on this project, but after 30 years of living here, I know I’m getting closer. I’m getting warm.