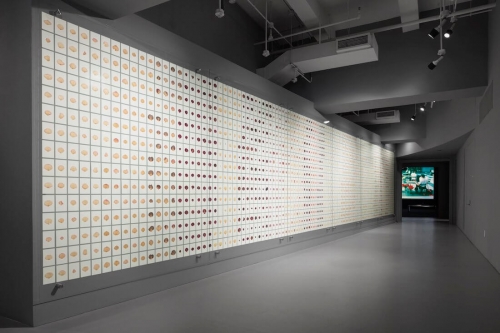 Sarah Meyohas is a visual artist working across media. For her project Cloud of Petals, she staged a performance at the site of the former Bell Labs. Sixteen workers photographed 100,000 individual rose petals, compiling a massive dataset. This information was used to map out an artificial intelligence algorithm that learned to generate new, unique petals forever.

The performance resulted in a film, six gaze-based virtual reality experiences, and a series of sculptures, presented during a large-scale solo exhibition at Red Bull Arts New York. The Cloud of Petals exhibition becomes a site for contemplation about a post-human reality and the future of labor in the face of automation. The film has been screened at various festivals, including the Minneapolis St Paul International Film Festival, Slamdance, NY Times Talks, CogX, and the Locarno Film Festival.

Previously, her 2015 cryptocurrency Bitchcoin and Stock Performance at 303 Gallery have also explored networks of information, power, value, and communication. Her work has been featured in The New York Times, Wired, Vice, Fortune, Nowness, The Atlantic and she appeared on the cover of the 20th-anniversary edition of Flaunt Magazine. She has appeared on CNBC, PBS, and CBC, and was listed on Forbes 30 Under 30 and Cultured 30 Under 35.

Meyohas holds a B.A. in international relations from the University of Pennsylvania and a B.S. in finance from the Wharton School. In 2015 she received an M.F.A. from Yale University.

French-American artist Sarah Meyohas explores our perception of beauty through bringing together nature and technology for her 2016 installation, Cloud of Petals. The project saw sixteen men undertake the painstaking process of manually picking petals over the course of four days that they considered most beautiful to be photographed and digitized. 100,000 rose petals were pressed, photographed and uploaded to the cloud. This special cut of a longer 16mm film ties together the expansive range of media the project covers—from photography and sculpture to digital files.

Meyohas on her AI artwork Cloud of Petals:

“Petals cannot digitize themselves. Human hands must individually open the flower, pick the petal, place it under the lens, press the shutter, and upload the image to the cloud. Then again, and again, and again. Computers document the signals generated by humans. When computers were human, they were often women.

In August, 10,000 roses were placed in the atrium of Bell Works. The work of photographing the individual petals and turning them into a dataset was performed by sixteen men. The photographs, a sequence of petals, reenact the rose. Beauty compels the act of replication.

The workers set aside the petals they considered most beautiful which were pressed to create a physical subset. The transmission of an understanding lies latent in the aesthetic choice — the decisive moment.

Glass exists simply not to exist. The impartial mechanics of the camera allow the petals, from which electronic pulses detach, to convert and converge as pixels, bits of color. Messages come in and out of the theater of digits.

The bit of information was invented at Bell Labs. One binary code for all, whose electronic signals are amplified by the transistor — on and off, expressed as a 1 or 0. He loves me, he loves me not. He loves me and we are one. If he does not, we are two. Two ones. When he is lost, he becomes zero. The addition of not.

The Bell Labs Holmdel Complex was completed in 1962, one year after the death of its architect Eero Saarinen. Entirely mirrored, the building reflects its pastoral environs perfectly, mapping them onto its modernist grid. The transistor, the laser, and the very ones and zeroes of information theory are among the many breakthroughs that came from the two million square feet of mind space inside.

In 1984, the Bell System was first broken up, and subsequently downsized as the nature of scientific research adapted to corporate needs. Bell had ushered in the age of information; the building was abandoned and nearly demolished. The walls resonated, the whiteboards still bearing formulas and the switchboards numbered by hand. In August 2016, the building was being revitalized as multi-purpose space by Somerset Development -- now, Bell Works.

Latent variables lie hidden. They are not directly observed, but are rather inferred through a mathematical model from other variables that are observed and directly measured. The advantage of latent variables is that they reduce the dimensionality of data. A large number of observable variables can be aggregated in a model to represent an underlying concept. In this sense, they serve a function similar to that of a theory. At the same time, latent variables link observations in the real world to symbols in the modeled world.

The haptic illusion arises. An act of touch may reproduce itself as a smell or a thought: the odor of a rose finding the breath of a long absence. To create mental images we use the same neuronal paths that make up material sensory perception.

This film is caused by the scene — the workers and the petals in the building reflecting light in such a way as to cause a trace on the light sensitive emulsion of the negative, like a pointed finger. The analogue becomes more pronounced side to side with the digital — as in, upon a technological evolution.

The representation of tonalities on the emulsion is continuous. The numerical code of a digital image, ultimately reduced to ones and zeros, is discrete. The analogue transcribes, making the image inseparable from the physical properties of the scene. The digital converts into pixels, exactly reproducible. There is the petal, and then there is the photograph of the petal. From that moment onwards, the separation only grows.

Thousands of images of petals will pulse through wires and populate servers.  The archive, a machine readable location, or the act of transferring data becomes a compulsion. Repetition produces what it repeats. Rose petals touch rose petals — the  accumulation and safe-keeping of petals as the transmission of information, a sustained set of acts.

The last act: to hold the terabytes of digital data alongside the preserved petals themselves as both archives. The loving search: is color imbedded into the material object, in the way that the data is embedded as ones and zeroes? The genetic code of a rose, an archive of our desire.

The petals are in the cloud. The field of critical interpretation is open. The petals, all one hundred thousand, are used as inputs for an artificial neural network. Each neural unit is connected to many others, and together create a system that is self-learning and trained, rather than programmed.

Generative adversarial networks are a branch of unsupervised machine learning —  implemented by a system of two neural networks competing against each other in a game. One is a generator and one is a discriminator. The 100,000 images of petals serve as the training data from which it can learn its attributes: the color and vibrancy, shape and contour, pattern of the pixels.

The generator is taught to map from a latent space to the set of petals in order to generate new images. The discriminator is simultaneously taught to discriminate between real petals and generated petals.

The generator adjusts the parameters of the latent space in order to generate petals that will fool the discriminator. These parameters can create an n-dimensional space in which all petals can be mapped, like points. This latent space is vast, generating new, unique petals forever.

We will never find an image of a petal stored inside the human brain. Seeing something in its absence is far less accurate than seeing something in its presence. The vast pattern of neurons in our minds, were it simulated in a computer, would mean nothing outside of the human body. Whereas computers can maintain exact images of petals that can remain exactly the same forever, even if the power has been turned off, the human brain maintains our mind only as long as it remains alive. The ultimate separation of consciousness to a material body is dispelled with a field of petals.“