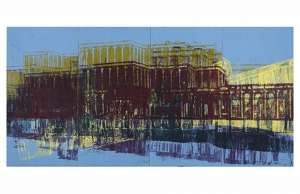 Some artists paint portraits. New York–based artist Enoc Perez has made modernist architecture his subject. Painting in a slashing overlay style that seems to channel both Andy Warhol and Franz Kline, in Liberty & Restraint, an exhibition that opened last month at the Dallas Contemporary and eight locations throughout the city, he investigates the gallery of local buildings designed by architect Philip Johnson. MODERN’s associate editor Sammy Dalati caught up with Perez at his cavernous studio in Astoria Queens, and asked him about his process and his inspiration for the show. 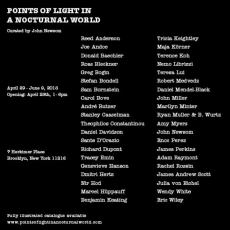 POINTS OF LIGHT IN A NOCTURNAL WORLD

Curated By John Newsom In Cooperation With Metro Pictures 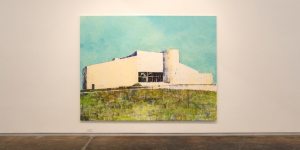 In vivid washes of color; in overlaid stencil-like images; and in bronze sculptures of massed, crumpled-up forms, artist Enoc Perez uses a multimedia approach reminiscent of Warhol and Rauschenberg to both celebrate and satirize some of the 20th century’s best-known buildings. In Dallas this month, he’s turned his sights on controversial modern designer Philip Johnson: In a show sponsored by local art museum Dallas Contemporary, Perez has created works featuring Johnson’s buildings, and then installed some of them inside the buildings themselves (of which Dallas has no fewer than six). The artist took a break from the museum opening to talk about the intrigues and the afterlife of America’s most infamous architectural gadfly. 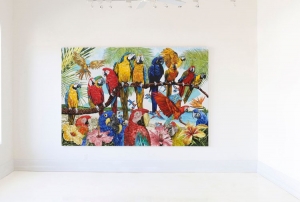 Brintz Gallery is pleased to announce the opening of ‘GARDEN PARTY,’ curated by gallery artist John Newsom. The exhibition focuses on the theme of pastoral nature, highlighting motifs of flora and fauna found within the work of five distinguished New York based painters including Joe Andoe, Donald Baechler, Ross Bleckner, John Newsom and Enoc Perez.